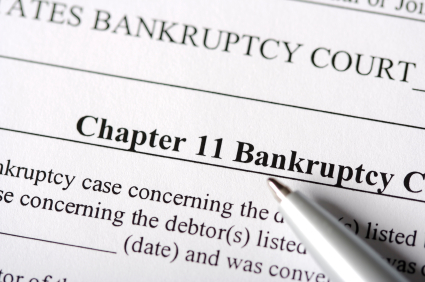 How does Chapter 11 Bankruptcy affect businesses?

Kodak is making executive changes and plans to cut 1,000 more jobs from an already shrinking staff by the end of 2012 as it prepares to exit Chapter 11 Bankruptcy in early 2013. It filed for bankruptcy protection on January 19, 2012.

The company, once a photography giant and the inventor of the digital camera, faced difficulties keeping up with rapidly advancing digital technology and fierce competition overseas. Kodak employed nearly 150,000 workers in its heyday in the 1980s; today that number stands at just over 17,000.  The company slashed 2,700 jobs in 2012 alone, and it is ready to continue that trend as it emerges from Chapter 11 restructurings. The area hardest hit by the cuts so far has been Kodak’s headquarters in Rochester, New York, which at one point held over 60,000 jobs. There is no word from the company on where the next round of cuts will occur.

The announcement comes after an auction of its 1,100 patents failed to meet Kodak’s needs to repay funds borrowed to pay for its bankruptcy proceedings. Initial estimates put the patents’ worth at $2.2-$2.6 billion, however the offering received lukewarm bids in the $500 million range from investors.

But Kodak is not closing its doors. Instead, it plans to focus on other areas related to digital printing and entertainment industry film. Its post-bankruptcy plan anticipates improvements in revenue starting in 2013. Whether or not the company reaches those goals so soon is yet to be seen, but restructuring in its executive tier holds promise for a brighter future. Chief Financial Officer Antoinette McCorvey and Chief Operating Officer Philip Faraci are both scheduled to leave Kodak, and McCorvey’s post will be replaced by Rebecca Roof, who will operate as interim CFO. Roof has held similar roles helping companies that are emerging from Chapter 11.

By selling off its patents, restructuring its departments, and focusing on new initiatives, Kodak is attempting to use Chapter 11 bankruptcy as it was intended: working towards becoming profitable again while undergoing financial restructuring and repaying debt. The road is not easy, but it’s possible, and companies both big and small have succeeded in coming out of Chapter 11 bankruptcy and increasing their bottom line.

If you are considering Chapter 11 Bankruptcy, or need help post-bankruptcy Call the Law Offices of Bruce Feinstein, Esq. today for a Free Consultation!